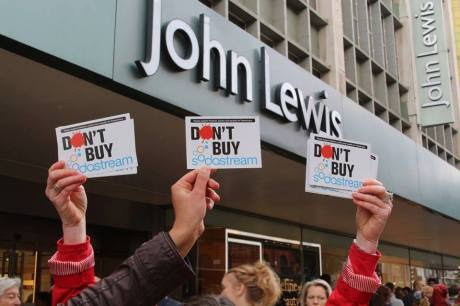 Saturday 12th October was the second Demo outside the John Lewis following the successful National Day of Action Against Soda Stream two weeks ago. It was the first time that I have personally been confronted with such aggressive Zionistic and apartheid supporting individuals during a peaceful demonstration and inspired me to volunteer to write this blog.
It all started off with one deranged looking middle aged man marching in front of our banner back and forth shouting ‘Alahu Akbar’ in what sounded like a broken Israeli/American accent and other things non-stop at the top of his voice. 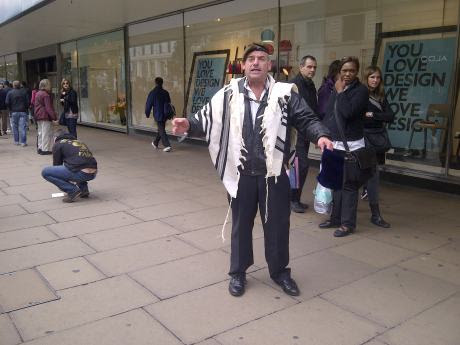 Since he was stomping in front of our banner and screaming Arabic phrases it naturally looked like he belonged to us, a very clever tactic he must have thought to make us all look ridiculous and deter people from engaging with us. However, the tactic did not work out because it became obvious that we did not want him there, which made passers-by curious about what was going on. They stopped to ask who this crazy guy was and why he was bothering us, which was a perfect opening line to point out the kind of ignorant people stealing land from Palestinians and why we demonstrate in front of John Lewis.
After an hour or so of screaming and annoying us the police finally arrested the deranged man and took him away in a van to the police station.
Three of his buddies however, who looked like funny caricatures of evil villains from kids movies, stayed on to continue spreading hate and trying to provoke us. When I suggested they joined their buddy in the jail cell, they took it as the perfect opening line to bathe me in racial slurs and insults including that I should go home and put on my burka. Some of the other activists pulled me away when I started responding in equal manner. 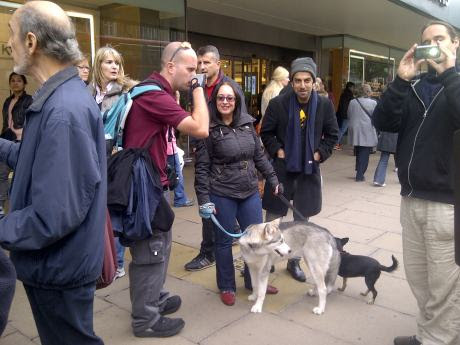 That’s when I learned that the man (in the grey hat) was associated with Kahane a terrorist organization and the woman next to him, Roberta Moore was actually kicked out of the EDL for being too fascist or a sociopath in other words. The third the guy pointing his camera just continuously filmed us .  I actually felt sorry for them. What a pitiful being one must be, when their whole meaning of life consists of finding ways to bother people.
In the meantime we kept on giving flyers to John Lewis shoppers and pedestrians. The reaction of them was very mixed. Some ignored us, some took the flyer with a smile, some gave us the thumbs up and some got mad… One guy called us idiots for demonstrating for this cause, a couple of others took the flyers tore and scrunched them up in front of our eyes before throwing them on the floor. Another guy walked up to our little cart with the Palestinian flag and leaflets, knocking it forcefully over before spitting in front of our banner
(the man in the black coat with his back turned walking away). Then the women he was with gave us the middle finger. 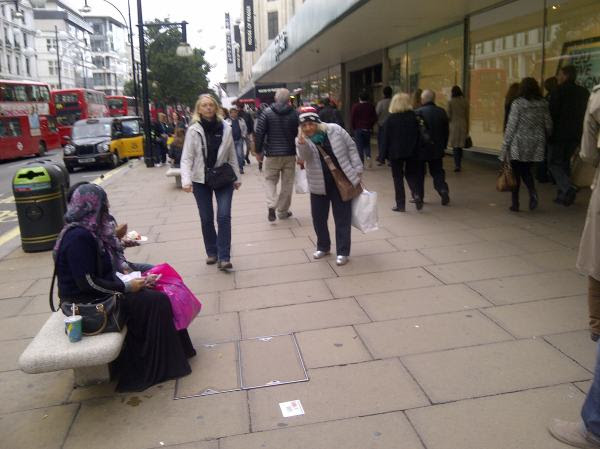 This behavior might be blamed on the pitiful upbringing of certain people but as they looked over 60 they should have known better it only installs hate against others, instead of manners which they are supposed to be instilling in their children and grandchildren.
As hateful as a handful of the responses were that we received, it was countered by genuinely interested people and it actually made many people more curious about what the protest was all about. They stopped by to ask what was going, why the police were there or why these nutcases were insulting us. In this sense the nutcases gave us perfect opening lines and the incentive for more people to become inquiring in our cause and find out about what we do. One lady was amazed by all the fuss and came to me so that I could explain to her what this is all about. I told her about the Prawer Plan and that John Lewis is actually selling products supporting illegal settlements. Her response: “Oh my god John Lewis, how could you do this??”
As frustrating as some of the treatments were we received, it showed us that there actually is a real reason why we are demonstrating and informing the general public about Palestine. The fact that certain people became mad and insulted us showed that they feel threaten. If our demonstrating wouldn’t make any difference, these people wouldn’t bother to show up just to hinder us. 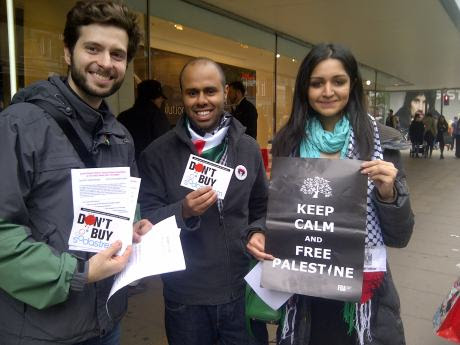